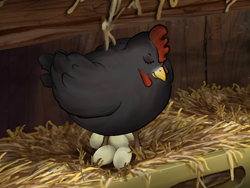 Coop was almost done but got delayed due to some potential legal issues. We’ve had to take a few steps back and revise some of the book. The changes are for the better though and it’s a better story overall now. Just catching up on some new animation and then it will be time to final up the audio. So looking forward to getting this project hatched! I have been kicking around the idea of doing a Kickstarter to help with promotion and some of the finishing costs.